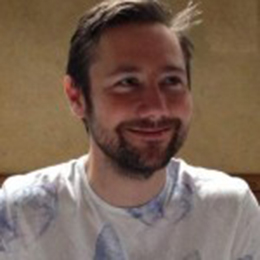 Jon Davies is a Montreal-born curator and writer based in Toronto.

The jury for the Emerging Curator of Contemporary Canadian Art was impressed by Davies’ original concepts and the quality and range of his work.

"Davies’ personal approach is a bridge between artist and audience. He routinely demonstrates that his curatorial vision is one rooted not simply in rigorous curatorial exercises (at which he excels), but also in creating opportunities for lasting engagement between audiences, art and ideas. This commitment to advancing contemporary art discourses is fundamental to Jon’s work as a curator. The writing accompanying his exhibitions is mature, well-researched and reflects his passion and perspective."

Davies’ curated contemporary art exhibitions include: People Like Us: The Gossip of Colin Campbell (2008), Where I Lived, and What I Lived For (2012–13), Kelly Jazvac: PARK (2013) and Sonny Assu: Possession (2013–14) for Oakville Galleries, where he is Associate Curator, as well as Ryan Trecartin: Any Ever (2010, co-curator), To What Earth Does This Sweet Cold Belong? (2011) and Coming After (2011–12) for The Power Plant Contemporary Art Gallery. His writing has appeared in publications such as C Magazine, Canadian Art, Journal of Curatorial Studies, Fillip, Little Joe, No More Potlucks and Cinema Scope, as well as in numerous books and anthologies on artists such as Daniel Barrow, Candice Breitz, FASTWÜRMS, Luis Jacob and Andy Warhol. He has organized many artists' film and video screenings with the collective Pleasure Dome, and currently sits on the board of Gallery TPW.