The recipient of the 2015 award is Kim Nguyen of Vancouver. Kim received her prize on April 27th, 2016 at a special reception at the Vancouver Art Gallery. 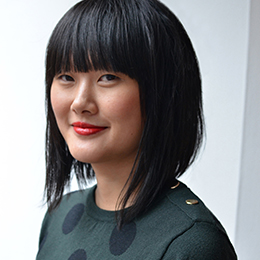 Curator and writer Kim Nguyen is the third recipient of The Hnatyshyn Foundation - TD Bank Group Emerging Curator of Contemporary Canadian Art Award. She received her Master of Arts in Critical and Curatorial Studies from The University of British Columbia and her Bachelor of Fine Arts (Honours) from The University of Manitoba. From 2011-2016 she was the director/curator of Artspeak, where she presented exhibitions and publications with artists such as Erica Stocking, Abigail DeVille, Yuji Agematsu, Valérie Blass, Aaron Flint Jamison, Marina Roy, and Danh Vo. Ms. Nguyrn has received awards from the Canada Council for the Arts, British Columbia Arts Council, and the Social Science and Humanities Research Council of Canada for her curatorial work and research. She was a member of the 2013 Canada Council Asia Pacific Visual Arts Delegation and in 2014 was a resident at the Fondazione Sandretto Re Rebaudengo, Turin. She lives and works in Vancouver.

“My work is a constant balance between taking great care of artworks and artists while operating as if I have nothing to lose. I can, and do, present things out of a deep affection for them (and with affection comes criticism), and I can be, and am, in service to artists always. ”

Nguyen was selected by a jury of arts professionals, including Candice Hopkins, Chief Curator at The IAIA Museum of Contemporary Native Arts and recipient of the 2015 Hnatyshyn Foundation Award for Curatorial Excellence; Reesa Greenberg, art and exhibition historian; and Pamela Meredith, Senior Curator, TD Bank Group, Toronto. The award was presented during a reception at the Vancouver Art Gallery.